Rising more than any other commodity this year

Coffee prices rose to a decade high on Wednesday, fueled by a shipping crunch, a spike in demand, and dry weather.

The ICE Arabica coffee futures contract, which tracks the higher-quality bean, was sitting above $2.40 per pound midmorning in Europe—more than double what it was at the start of this year. 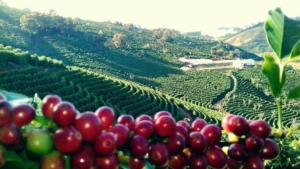 Together, those contracts show a coffee market in chaos. Coffee has posted the largest price rise of any commodity in 2021—a year that has consistently broken records across markets for energy and food.

Although there isn’t a direct relationship between the futures markets for coffee and how much you’ll be paying for your morning coffee, prices for such staples are rising for consumers. Factors that have hit prices for the bean, including shipping shortages and weather, are also hitting everything else that goes into that cup—from packaging materials, to labor costs, to the cost of energy involved in shipping and roasting coffee.

The coffee market as a whole swung from a surplus to a deficit this year of 5.2 million bags, according to Rabobank analysis. The largest factors have likely been shipping constraints and container shortages, analysts said—and so, unable to know with certainty when and how coffee would be transported, buyers likely overbought, fueling a cycle of panic buying.

“While production was relatively unaffected by COVID and there is still uncertainty about any potential demand growth in 2021, we believe sales of green coffee have been faring better than expected because coffee was directly impacted by the scarcity of container availability in 2021, leading companies to over-purchase in order to guarantee production and sales,” the analysts wrote.

Rabobank predicted that the “panic buying” would stop after Christmas, but the wild card is the weather in Brazil, which is the largest producer of the Arabica bean. Brazil was hit by both dry weather and frost this past season.

Food prices are already at a 10-year high, according to a tracker compiled by the UN’s Food and Agriculture Organization. With inflation across nearly every sector, fueled by a spike in consumer demand plus labor shortages and unpredictable weather, analysts don’t expect that overall trend to end soon. The risk is particularly high for energy and food, which CEOs have warned could risk a food crisis among the world’s poorest.

The arabica bean, which you’re more likely to find in your morning latte, is often considered higher quality and lighter tasting. Robusta is more bitter tasting and highly caffeinated, and is usually found in instant coffee (though it can also be found in a good Italian espresso). Its largest producer is Vietnam..

Do you know what Specialty Coffee is?

Coffee production is expected to reach 55.7 million bags in the 2022 harves...
Scroll to top